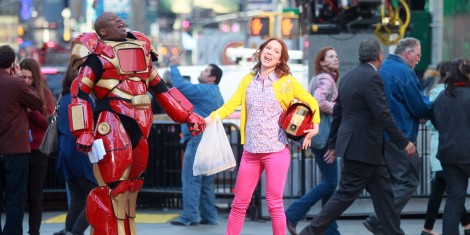 The Unbreakable Kimmy Schmidt showing us how happy a Happy City really can be. Photo by Steve Sands/GC Images

Architects and urban designers have been doing some strange things recently. They’ve been asking people to drop their wallets on the sidewalk, they’ve scanned brains, and they’ve outlawed personal cars in busy cities.  All in the pursuit of happiness.

Charles Montgomery’s book titled, Happy City: Transforming Our Lives Through Urban Design, compiles and explains some of the most successful urban interventions and studies related to the goal of increasing happiness.  Because you’re a busy person, grinding through life in search of happiness, I’ll share just two of the many anecdotes from Montgomery’s book that illustrate how designers are taking advantage of the study of happiness.

The Transformation of Bogotá

Towards the end of the twentieth century, Bogotá, Columbia was a hell hole.  Terrorism and civil war crowded the city with refugees.  Traffic, pollution, and poverty crippled the country’s pride.  In 1997, Enrique Peñalosa ran for Mayor with the simple promise that he would make Bogotans happier and he won.

He focused on improving transportation and public space to increase happiness and terminated the city’s existing highway expansion plan and used the money to create hundreds of miles of bike paths, plazas, parks and community buildings like schools and daycare centers.  He banned drivers from commuting by car more than three times a week and created a rapid-transit system with buses.

The happiness impact of his transformations became clear when he experimented with a día sin carro.  On February 24, 2000, all private cars were banned from city streets for the day.  People were still able to get to work, schools reported normal attendance, and for the first time in 4 years, no one died in traffic.  Afterwards, polls revealed that citizens were more optimistic than they had been in years and they eventually voted to make it an annual event.  Since Peñalosa took over, mounds of evidence show that the city has become safer, healthier, and happier. 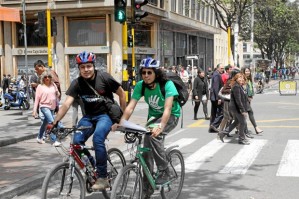 Apparently, happiness is more closely tied to our relationships with others than our income.  Multiple studies of the World Values Survey and the Gallup World Poll have backed up the idea.  These studies use complex surveys to measure life satisfaction and happiness but there is a much more simple predictor–the wallet question. Surveyors ask people to rate how likely it is that a neighbor or stranger would return their wallet if it was left on the sidewalk.  Helliwell found that the locations where people felt they had a better chance of recovering their wallet also had higher happiness ratings.

Further investigations showed that suburban and exurban families trusted others less to return their wallets than their urban counterparts.  Montgomery attributes this decrease in trust to fewer interactions between neighbors, which limits sociability and familiarity with your neighbors.  In denser, urban communities, it’s easier to spend time with your friends and you’re more likely to bump into your neighbors.  As a result, urban communities are measurably happier than suburban and exurban families. 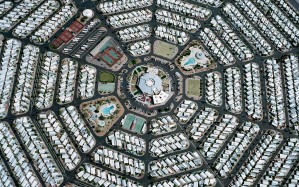 If you’d like to learn more about how urban designers are studying and creating happy cities, read more about it in Charles Montgomery’s book, Happy City: Transforming Our Lives Through Urban Design.